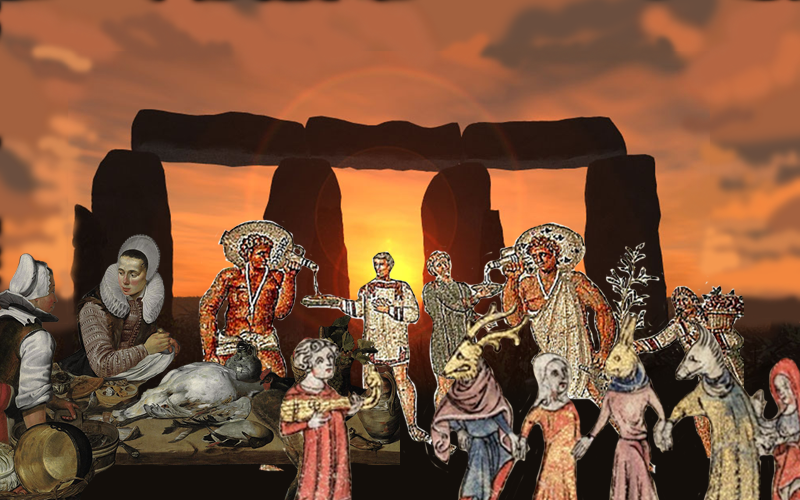 We are now well into the Christmas countdown and as we at Global Auctioneers gears up for the festive period, we have also had a look into why Christmas has become such a gross expense and how to avoid the resulting stress this causes. For the majority of us, Christmas shopping is another hurdle we need to (quickly) jump over. But hopefully, before you do so, it is worth reading a bit more about the origins of Christmas, how it has reached this inflated state now, in 2020, and how to avoid the stress.

It is in this day and age, arguably, still a Christian tradition. But Christmas predates Christ’s birth by up to 2000 years!

Earliest evidence for the celebration of a festival that is akin to Christmas dates back to the Neolithic period, where people would celebrate the winter solstice on 21st December (the shortest day of the year). Archaeologists have found evidence of gift-giving, including daggers made out of the newly found bronze, necklaces and hair decorations. It is hypothesised that these celebrations followed in line with a rowdier depiction of Christmas. Feasts and dancing is thought to have been commonplace in these celebrations highlighting the unchanging nature of humans!

Let’s fast forward a couple thousand years…To set the scene, we are in Rome, around the 17th December, where a festival called Saturnalia started its first of five days of feasts, stupidity, dancing and even the reversal of hierarchical structures. Yep, you read that right. Masters would swap their role for the slaves and vice versa. Small gifts were exchanged, including sigillaria which were small wax figures akin to dolls. This festival undoubtedly originated from the Neolithic period, but it still has a long way to go before it is the festival we recognise today.

The Medieval and Tudor period shows a shift from the pagan to the religious, albeit with the maintenance of Neolithic and Saturnalia traditions. The medieval period is when people started decorating their homes with evergreens. It is also the period when the Yule Log rose to prominence, something many of us still eat today! The Tudor’s took it a step further. Baking a bean into the cake, whoever received the slice with the bean in it was proclaimed ‘King of the Bean’, open to imitation and ridicule for the remainder of the day!

Moving forward to the Victorian period, celebrations became more toned down. The festival went from being something wacky, rowdy and ridiculous into a reflective, family-orientated holiday. This change was largely due to Queen Victoria’s reign. King Albert brought over the Tannenbaum or Christmas Tree which rose exponentially in popularity in the 1840s. Other traditions such as Christmas crackers, Boxing Day, cards and turkey also originated in the Victorian era. Father Christmas even made his appearance from America in 1870s!

So, that is the history of Christmas in the UK. We can certainly see where traditions have come from, but it seems we have entered a new stage of Christmas evolution. One which is highly focused on consumerism, moving away from its more traditional routes.

When did Christmas become so expensive?

The answer to this questions lies in the Victorian era. With Santa being brought over from America, modern consumerist behaviour was solidified as increasing pressure to supply gifts was mounting. Big brands such as Coca Cola shaped the Father Christmas we know and love today in the early 20th century. Whilst recognisable names such as F. W. Woolworth brought over baubles from Germany, starting the tree decorating craze in the 1880s. With the rise of industrialist capitalism, Christmas extravagance also increased.

The Victorian period is also where Christmas cards, crackers and Christmas stories became popularised. With the introduction of the penny postcard in the mid 1800s, people were able to cheaply send Christmas cards to loved ones. This trend grew until now, when billions of cards are sent each year!

Nowadays people spend, on average, £700 at Christmas. Big brands such as Amazon, John Lewis, Debenhams and more plug the image of the picture perfect Christmas. Plastered all over TV, billboards, social media and the radio, consumers are surrounded by this message, which in turn facilitates this gross expense, year in, year out!

How can we overcome this?

The main way we can overcome this great expense is by changing our shopping habits. Shopping more thoughtfully, rather than what’s on trend, is a good way to decrease your spending. Especially in today’s climate, shopping locally and supporting smaller businesses is a good way to ensure everyone has a good Christmas.

Here at Global Auctioneers, we fall under this category. With the prospect of getting that £80 Hot Wheels set for only £30, or that Gucci perfume worth £75 for a minuscule £20, you can shop smarter. The majority of our auctions are entirely focused on consumer goods, sourced from those big brands pushing for increased Christmas sales.

Why is the auction a good alternative to retail shopping?

Well, the first and most obvious reason is the money saving aspect of buying from auctions. The average saving across the board is around 83%. Now, imagine paying only 17% the usual cost of Christmas? Well, you don’t have to imagine because it is a reality here at Global.

The second reason to do your Christmas shopping at Global is that there truly is something for everyone here. Whether you have a bit more disposable income, the designer bags may be for you! For those of you who have been effected by the pandemic financially, perhaps the cosmetics sale or the Wednesday general, where you can get some nifty, useful and sought after gifts for next to no money!

And the third reason, is that you can support local business by still buying branded gear! Because a lot of our stock comes in from high end department stores, we are able to supply brands such as Tefal, Gucci, Moschino, Calvin Klein, Dhelongi and more.

So, now you know where Christmas came from, how it became the expensive monstrosity it is today and how to overcome this expense!

Will you change your Christmas spending habits? Let us know in the comments!